The development of FRMG was initiated in 2004 in order to participate to EASy, the first parsing evaluation campaign for French. Developing a first working version for the campaign took less than 6 months, illustrating the interest of meta-grammars to quickly design relatively large coverage grammars.

However, the last 10 years have been busy improving FRMG and have led to the development of several auxiliary tools to monitor, debug, evaluate, ..., in other word, the necessary duties of real-life grammar engineering.

Actually, improving a grammar like FRMG means to work along the 3 following axes:

Unfortunately, these 3 axes are not easily conciliable !

The normal way to improve coverage is of course to add new classes in the meta-grammar to cover missing syntactic phenomena. This process may be helped by parsing large corpora and looking at "failed sentences", ie sentences that couldn't be parsed. When modifying the grammar, it is also very important to try test suites and to re-parse corpora to check that sentences that were successful remain successful (for FRMG, FTB train has became such a test with more than 9K sentences).

Actually, there may be many reasons for a sentence to fail, not necessarily because of missing syntactic phenomena. It may also comes from missing or bad lexical entries, new words, badly recognized named entities, exotic typography, spelling errors, ....

In order to better identify the source of errors, we developed error mining techniques, applied when processing new corpora (for new domains such as medical, legal, literacy, subtitles, ...). The algorithm is essentially a variant of EM (expectation maximization) that tries to find suspect words that tend to occur more often than expected in failed sentences and in presence of words that on contrary tend to occur in successful sentences. Error mining proved to be very useful to detect lexical issues, but also to detect exotic typographic conventions and even syntactic issues. Actually, the idea of error mining may be extended to go beyond words, by working at the level of part-of-speech, n-grams, ...

A nice case was provided when parsing the French Question TreeBank, with a set of similar sentences that failed, leading to the addition of just a single class special_cleft_extraction_wh completing special cases of cleft constructions:

However, I tend to stay parsimonious when extending the meta-grammar, waiting for a clear generic view of a new syntactic phenomenon (rather than adding a set of related special cases) and trying to have a good understanding of the interactions with other phenomena.

Another way to improve coverage in the robust mode provided by FRMG that may be used to return a set of partial parses covering a sentence that has no full parse. While interesting, the resulting partial parses tend to have a lower accuracy than the full ones, and the robust mode remains a default mode when everything else fails !

More recently, a correction mode has been implemented to be tried before the robust mode. The motivation is the observation that many failures actually arise from "errors" in the sentences, such as missing coma, participles used in place of infinitives (and conversely), agreement mismatch between a subject and its verb (or between a noun and adjective), .... So a set of rules has been added and the correction mechanism detects from left to right if some of these rules apply, proposes a correction (for instance, underspecifying the mood of a verb), and re-parse (but keeping trace of what has been already computed thanks to chart parsing). The correction mechanism is a way to get full parses even in presence of errors. As a side effect, the mechanism also provides a nice way to potentially deliver feedback to an user about his/her errors (first step towards a grammar checker, cf Parslow's master thesis)

The basic way is to Improve the set of disambiguation rules and their weights, but it is a really difficult task. Adding or changing a weight may have threadhold effects

Tuning the weights of the disambiguation rules on the French TreeBank have greatly improved the accuracy of FRMG (5-6 points). The algorithm is a kind of batch perceptron, except that it works with lower supervision than usual perceptron. The issue comes from the conversion from DepXML to FTB/Conll:

Accuracy is controlled very regularly by running evaluations on treebanks, for instance on the EASYDev corpus (Passage schema) and nowadays the French TreeBank (FTB/Conll schema), but also Sequoia TreeBanks and more recently of French Question Bank (FQB) and UD_French treebank (but pb with its quality !)

Several tools have been developed to get finer-grained evaluations and to monitor the differences between successive runs (to check the impact of modification in the meta-grammar and also in other components).

Many many ideas have been explored, most of them leading to failures !

We list here some of most successful ones (it would be really difficult to describe all of them into details !)

The first one is obviously tree factorization, but we already talked about it !

Moving to an hybrid TIG/TAG grammar 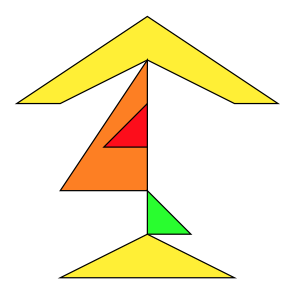 And actually, a grammar like FRMG is almost a TIG one. Still, there exists some wrapping auxiliary trees that may "contaminate" left and right auxiliary trees (and I regularly find new rarer phenomena leading to wrapping trees).

Nevertheless, when compiling FRMG, it is possible to determine which auxiliary trees act in a TIG way, and which ones are wrapping one or do not act in a TIG way (even if they have a leftmost or rightmost spine).

When compiling FRMG, a left-corner relation is computed that indicate which syntactic categories and which trees can start given the current word and the next one, using their form, lemma, and part-of-speech.

The left-corner relation is very efficient at parsing time (times divided by 2 or 3). However, the size of this relation grows quickly with the complexity of the grammar (8K rules for FRMG) and its computation (at compile time) may take some time (and memory). It seems difficult to compute more refined version of this relation (with longer look-ahead).

Using lexicalization to filter the grammar

The word of the sentence are used to filter the lexicalized trees that are potentially usable. The non-lexicalized trees are activated by default. Lexicalization drastically reduces the search space by avoiding to try trees that have no chance to be anchored.

When a tree has several lexical components (anchor + coanchor and/or lexical nodes), the filtering tries to be clever by checking the existence of some (discontinuous) sequence covering the lexical elements.

A mechanism of constraints has been added to restrict some criteria such as the length of a constituent, or the number of dependents for a given tree.

Very recently, because of a strong degradation of the parsing times, I started investigating the use of guiding information such as tagging information to reduce the search space.

Tagging is a standard processing step that is not used by default in FRMG. Instead FRMG processes all lexical and tokenization ambiguities returned by SxPipe and FRMG Lexer.

For the tagging experiments, we have combined MELt with a model trained on the FTB, but also another model trained on the output of FRMG (without tagging). Tags were assigned to words only when both models agreed and have a high level of confidence for the label (over 98%). Ambiguities were kept for the other words.

Another step was to attach supertags on words. These supertags are actually tree names and are attached on their potential anchors. MElt was tried to learn a model from the outputs of FRMG on the FTB but the model was not good enough. Another model was then trained using DyALog-SR as a fast dependency parser, seeing the supertags as dependency labels between an anchor and its governor.

A last step dubbed lcpred was to learn the probabilities to start a tree at some position given local information (the current word and the next word). Only the n-best trees are kept, hence restricting the left-corner relation. Again the learning was done on the output of FRMG on FTB. lcpred may be seen as a way to restrict the possibilities of the left-corner relation (it could also be a way to attach probabilities on it).

So, a key characteristic of these guides is that the learning is done on the output of FRMG (without guides). The primary aim is not to improve the accuracy of FRMG but rather to restrict to the most probable choices FRMG would have made without guiding, pruning the other ones. However, I've also observed gains in accuracy.

Of course, the guiding is not perfect and tend to degrade coverage. So, mechanisms were implemented to try the discarded alternatives in case of parse failure (they take place after normal parsing and before trying corrections, and then partial parses)

The best way to improve efficiency remains to better constraint the syntactic phenomena in the meta-grammar, without loosing too much in terms of coverage. A rough way to monitor that at parsing time is to check the level of ambiguity in parses using several ambiguity metrics, one of them being the avg number of governors per word.

Another way to show ambiguity points is to follow how search space is explored when advancing in a sentence. It can be done using the follow option is the parsing service.

We provide several elements of information about the past and current performances of FRMG.

An evolution graph for parsing times in 2008

We have also conducted evaluation of FRMG, DyALog-SR, and the combined one on the heterogenous SEQUOIA TreeBank (several domains) 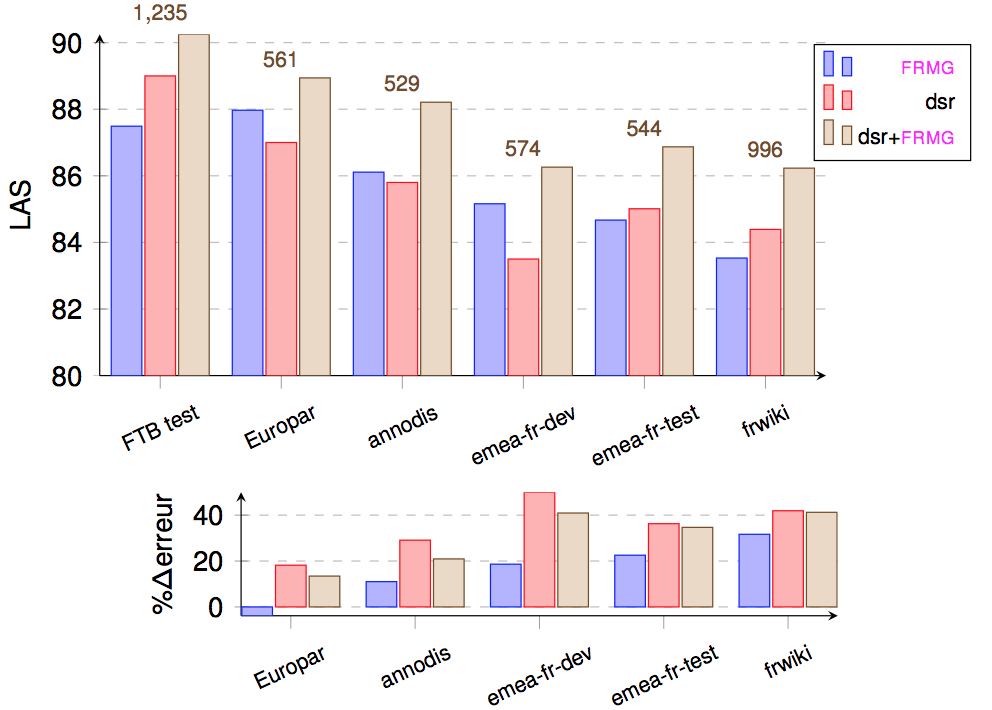 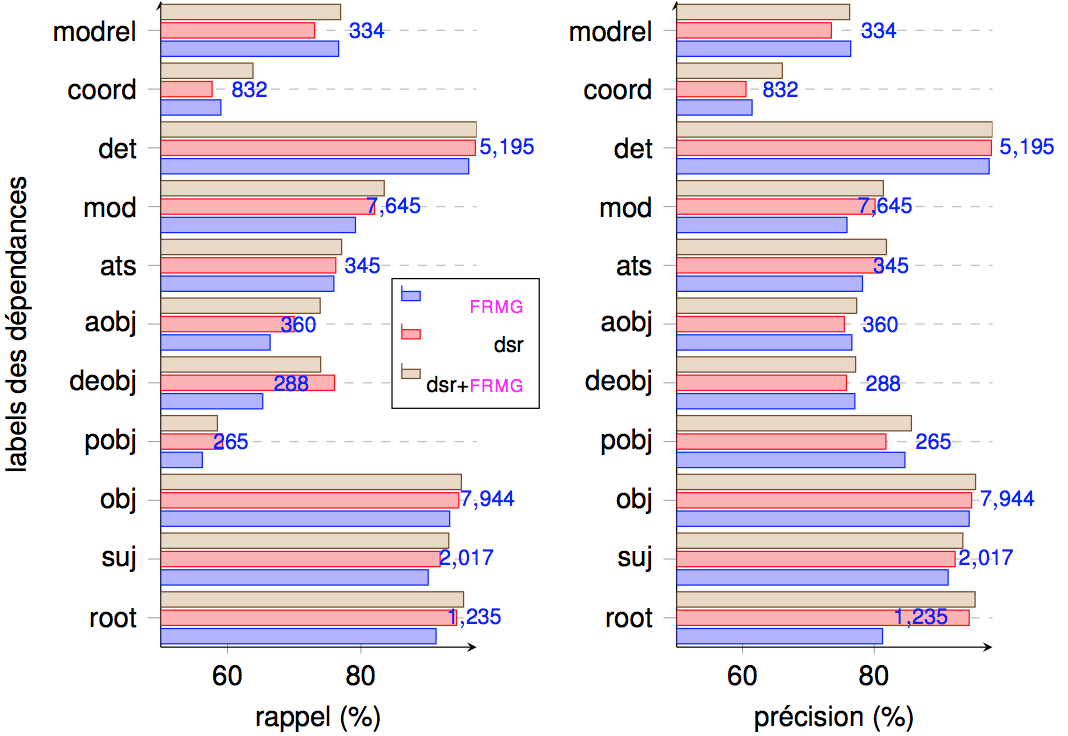