In our first examples with TAGs, we have seen that trees may be combined through substitution and adjoining to get complete parse trees.

These parse trees may be useful, but what is actually more useful are derivation trees (my opinion, but it may be discussed) ! A derivation tree keeps trace of all operations (substitution or adjoining) needed to build the parse tree, with the indication of the nodes where the operations took place, and of the elementary trees that were used.

The following figure shows an example of a derivation tree 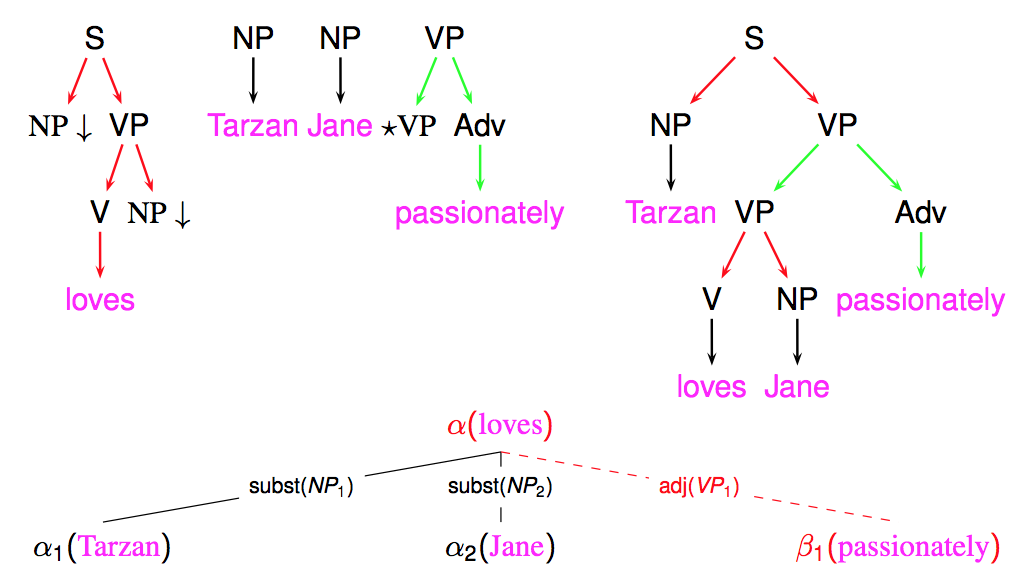 The interest of derivation tree partly stems from the observation that they better reflect the underlying semantic structure (than parse trees), in particular by relating a predicate (such as a verb) with its arguments (through substitution edges).

A derivation tree can also be more straightforwardly converted into a dependency tree, by establishing a dependency between the anchors of the trees that are the source and target of each derivation edge. For instance, in the previous example, a dependency edge will be established between loves and Tarzan. In the case of non-anchored trees (present in FRMG), a pseudo empty anchor will be positioned in the sentence (on the left-side of the span covered by the tree) and used as source or target of the dependency.

In practice, the FRMG parsers computes all possible parses for a sentence. But rather to enumerate all possible derivation trees, it may return them under the form of a much much more compact shared derivation forest ! The basic idea of shared forests is that not only subtrees may be shared but also contexts, leading to AND-OR graphs.

However such AND-OR graphs can also be represented under the form of context-free grammars (an important theoretical result), with terminals and non-terminals decorated with spans over the sentence. Such derivation forests as CFGs may be returned by frmg_parser with the option -forest (inherited from DyALog). However, nobody (but I) really wants to have a look at them !

A first step is to get a shared dependency forest, following the principles mentioned above (to convert a derivation tree into a dependency tree) but keeping as much as possible sharing. The results is the base for the native DepXML representation of the output of FRMG with the following XML elements (some of them being visible in the graphical view derived from DepXML as illustrated below on the famous "he observes a man with a telescope" with prepositional attachment ambiguities):

The DepXML annotation schema relies on

Disambiguation is primarily achieved thanks to a set of around 230 heuristic disambiguation rules assigning weight to edges. These rules essentially consult information related to a single edge, such as its label, type, source and target nodes (part-of-speech, lexical information, morpho-syntactic features, ...). Some rules may also consult information about adjacent edges (incoming ones to the source node or outgoing ones from the target node). A very small number of rules may also consult alternative edges to the one being evaluated.

For instance, the following rule favors the modal verb edges:

In its initial (and default) setting, the weights associated to the rules were manually set and already provided a good accuracy (over 80% LAS accuracy on the French Tree Banks). Since then, machine learning techniques have been designed to learn these weights from the French TreeBank, boosting the accuracy around 87%. More details here !

As already mentioned, the native output schema for FRMG is the DepXML one, that may be used both for representing a whole shared dependency forest or a single dependency tree (which partly explains some of the complexity of this schema). It also tries to provide all pertinent information (such as hypertags and morpho-syntactic feature structures).

However, over the years, it became necessary to implement converters to other annotation schema:

At this point, it is worth mentioning that we have here a clear distinction between symbolic grammars and data-driven approaches. A symbolic grammar is supposed to deliver the parses in relation with its structures and underlying grammatical formalisms. Conversions are needed when dealing with another schema. On the other hand, data-driven approaches learns the schema from the data, and may learn another parser for another schema from another treebank. There is generally no need for conversion.

Conversion between syntactic schema may seem as relatively simple problem. This is not the case !

Even between dependency-based schema, the source and target schema generally differ on their set of dependency labels (easy), part-of-speech (more or less easy), handling of MWEs (difficult), and notion of heads (even more difficult). The difference on the notion of heads means that local modifications of the input dependency structure may not sufficient and that modifications may propagate far away in a sentence.

For instance, in FRMG, modal verbs are adjoined on the main verb, while they are considered as main verbs for FTB and UD, as shown on the following exemples.

The converters for FRMG are essentially a set of transformation rules. However, to avoid a multiplication of the number of such rules, a notion of propagation has progressively emerged leading to 2-phase rewriting system. The first phase consists into applying basic transformation rules, some of them creating edges with "propagation" constraints. For instance, an edge with an up-constraint will reroot the edges leaving from its target node at the level of its source node.

Thanks to adjoining and the extended domain of locality of TAGs, FRMG is able to provide relatively deep analysis, in particular through long distance dependencies.

However, in the perspective of information extraction application where one needs to know all the actants involved in an event, it is immediate to realize that some of these actants are hidden and not immediately available. Recently, we realized that some information could be added at the level of the meta-grammar to more easily retrieve and materialize these "deeper" dependencies as secondary edges.

The following sentence shows several instances of such deeper dependencies (in gray) for controlling verbs and coordinations, with "lui" being the hidden subject of both "partir" and "revenir".

These deeper dependencies are still experimental. As explored for the converter, they require some notion of propagation to be applied during the conversion of the shared derivation forest into a shared dependency forest, propagation that it not yet complete and correct ! Also, the cost of applying the propagation in a forest is still relatively high.

But nevertheless, it is interesting to observe the effect of propagation on the following complex and somewhat artificial sentence:

Another experimental mechanism has been also deployed at the level of the parser to deal with some specific cases of ellipses of coordinations. In these cases, a deeper representation would like to materialize the shared elements and the ellipsed ones. In the parsing interface, this mechanism may be activated by checking the option box "Coordinations (expérimental)"

Checking the option, we get the following parse, where we observe that the ellipses of both "veut" and "donner" are retrieved with their own set of arguments.

More examples may be found here.